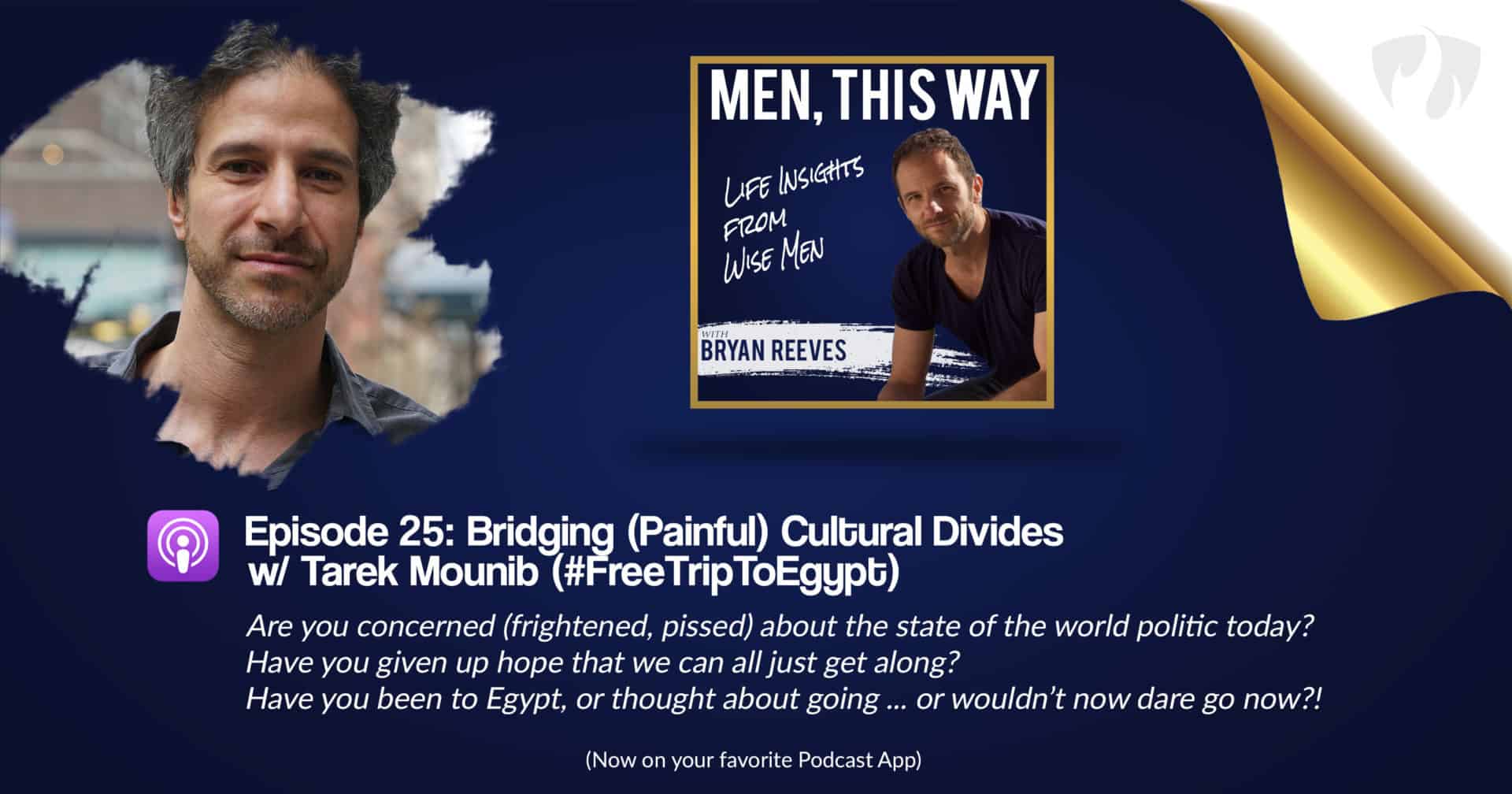 Are you concerned (frightened, pissed) about the state of the world politic today?

Have you given up hope that we can all just get along?

Have you been to Egypt, or thought about going … or wouldn’t now dare go now?!

In this episode, my guest is Tarak Mounib, whose courageous new film, Free Trip To Egypt, has just come out and is playing in movie theaters across the country this month.

Before we dive in with Tarak, I want to tell you something about me you don’t know: I have an adopted Egyptian brother.

He lives in Nashville with my dad and step-mom. I met him 20 years ago, when I was fresh out of the military and traveling around the world desperately trying to find myself …. Well, one of the many places I found myself was in the heart of Cairo, where I lived with Wael’s family (his name is Wael) for 3 months. In the summer just before 9/11 … what i experienced changed my life forever.

I had never before experienced such a culture of hospitality and welcoming. Yes, there were things that bothered me about the experience in Egypt, that felt oppressive like the military, but more than that, I was left with an indelible imprint on my soul of the profound capacity Egyptians have to be kind, loyal friends and companions, to be concerned and present, and to be loving. When 9/11 happened a few months later – and I was 3 miles from the Pentagon when it was hit, attending a 9am talk in downtown Washington D.C. by president Bill Clinton’s Middle East Envoy, Ambassador Dennis Ross, about the state of peace talks in the Middle East – well I was devastated.

Yes because of the attacks themselves – and even more so because suddenly a hatred so nasty and violent began to emerge even from a few people close to me, towards the very Muslims I had fallen in love with, and who had fully embraced me as their own son, just months earlier.

So when my friend John Raatz, founder of the Global Alliance for Transformational Entertainment  (known as GATE) told me he was taking on marketing and promotion for a movie about bringing people from places in America where that same hatred and vitriol towards Muslims has been erupting these last few years TO Egypt … to live with Egyptian families, to essentially be swallowed up by the same love and welcoming I experienced 20 years ago … I was over the moon!

John allowed me to do a private screening in my home for some friends before it was released, and well … here we are today. By the time you hear this podcast, Tarak’s film will have been shown in over 500 theaters across North America.

This is my conversation with Tarak, a profound exploration into culture, the shared human experience, and the hope, and wisdom, and futility in learning how to bridge the sometimes excruciating differences that divide people everywhere, and how getting along doesn’t require … CAN’T require … MUST NOT require … that we all think the same.

Definitely stay tuned for Tarak’s 5 Key Takeaway’s at the end of this episode of Men, This Way …

Find Tarek’s film and his campaign “Pledge to Listen” @ www.FreeTripToEgypt.com