Comparison is the Thief of Joy w/ Quddus Phillippe (022) 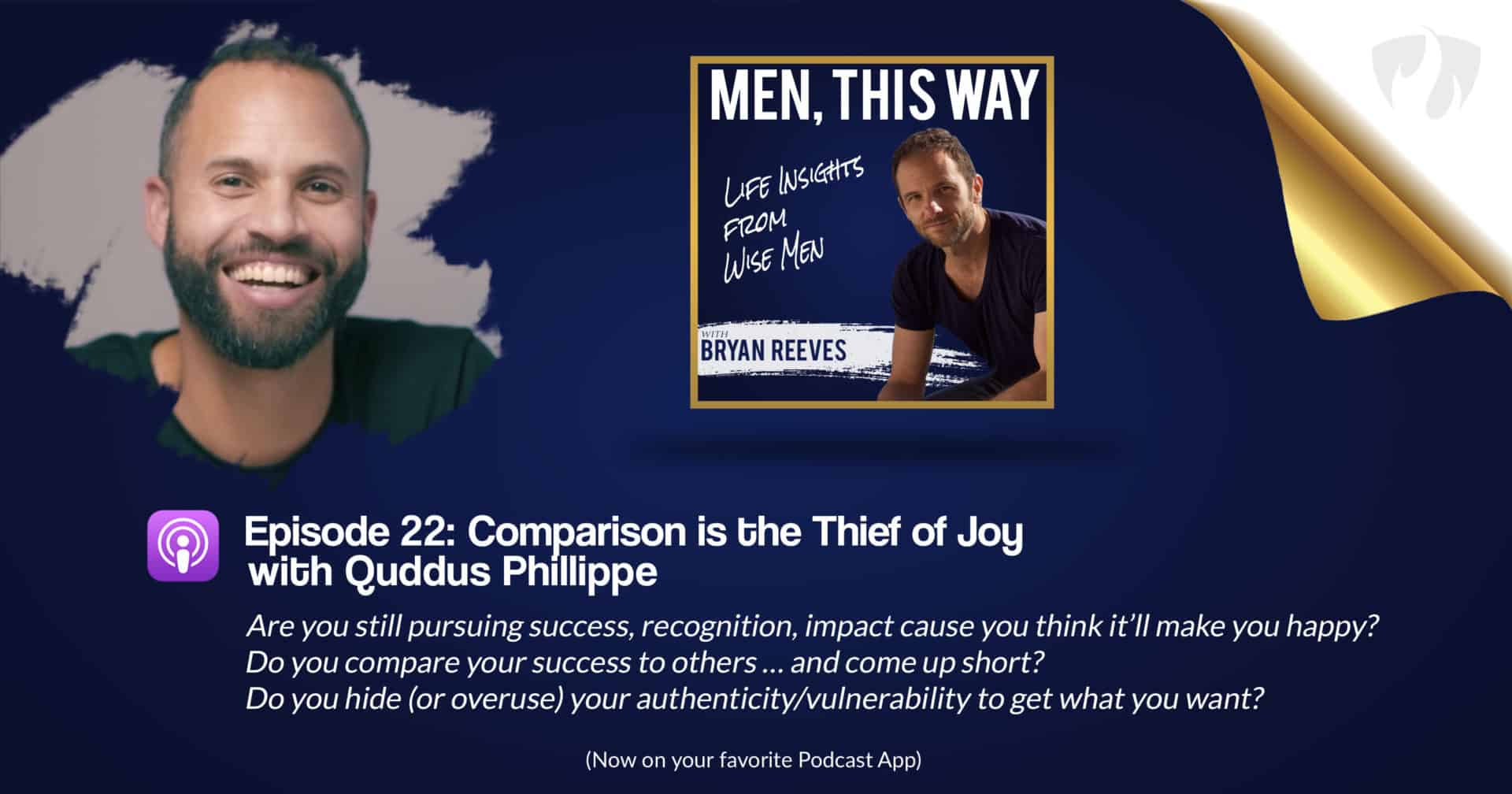 Are you still pursuing success, recognition, or just more likes on your posts ‘cause you think it’ll make you happy?

Do you compare your success to others … and come up short?

Do you hide your vulnerability and authenticity – or overuse it? – to sell yourself (your brand)?

“If Oprah and Ryan Seacrest had a love child, the kid would end up being like Quddus.”

Quddus first burst onto the world platform as host of MTV’s biggest show, Total Request Live from 2001 to 2006. He’s since interviewed and connected with and worked with the biggest stars and celebrities on the planet: Will Smith, Beyoncé, Jay-Z, Ben Affleck, Denzel Washington, Usher Britney Spears, Justin Timberlake and pretty much anyone else you might think of.

But that’s not why I invited him on Men, This Way. I invited him on, because since fate craftily brought our paths together – not once, but twice, in completely serendipitous moments – I’ve come to know Quddus as a deeply inspired and inspiring man in his own right, and as a friend.

He’s also a fascinating study in energy. Because he is one of the most visibly luminous and energetic people I’ve ever met! I first met him at the END of a 4-day transformational workshop where I had been partnered up as a workshop buddy with a recent ex-girlfriend of his, this gorgeous Romanian actress/model I would naturally have an ill-fated crush on for the ensuing few months after that workshop … when Quddus came on the last evening – all friends and family were invited to attend the last evening of this particular workshop – I only remember his bright smile and outrageous charisma and a massive energy that just lit up the room such that I felt like that tiny little blue dot we call Pluto suddenly placed in proximity to our exploding Sun!

But I didn’t get to know him that night. That happened a few years later, when I overheard him deftly navigating an uncomfortable phone conversation in the lobby at the posh and exclusive SoHo house in Hollywood, where I was teaching a relationship workshop.

Quddus attended my workshop that day, and soon after he invited me to attend the first weekend of a new workshop he was creating with his brilliant and talented in her own right wife, Carmina, a workshop called Camera Ready, in which they teach participants who have an important message they want to get into the world, how to really BE AUTHENTIC on video to help them connect with audiences to really make a meaningful, lasting impact.

“Media training from the inside out,” they call it. I can’t imagine more important work for anyone who uses media (including social media) for their work.

One last thing, Quddus and I recorded an earlier interview which quickly turned into more of a coaching session as he was going through a tough moment. We decided not to share that, but we do refer to it here, and I tell you that so you’re not confused.

Definitely stay tuned for Quddus’ 5 key takeaways at the end of this episode of Men, This Way.

36:20 ~ KEY INSIGHT: Before any lofty goals of changing the world, let’s start with our own backyard
38:02 ~ KEY MAN TO LEARN FROM:
Daniel DiPiazza
Mahatma Gandhi
39:54 ~ KEY RESOURCE (most impactful, inspiring book, movie, podcast): “Shoe Dog: A Memoir by the Creator of NIKE” (Book) by Phil Knight
40:24 ~ KEY INVESTMENT (the best thing you spent money on, under $10,000): Meditation and yoga
41:03 ~ KEY PRACTICE (7-day challenge to the men listening): If you are in a relationship, Asking for permission to be “untransformed” when discussing feelings you are uncertain about. If you are not in a relationship, find the people around you that you feel comfortable sharing with.

Find Quddus @ www.CameraReady.co
As well as @Quddus on InstaGram