We are truly entering the Golden Age of Authenticity! 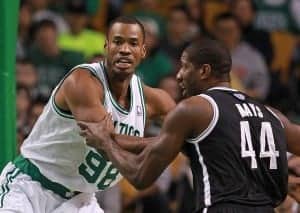 Even as a straight man, I literally get ecstatic chills in my body when something majorly public happens that advances the cause for not just legal equality for gay people, but for the simple acknowledgment that …

… gay people have every right to live an extraordinary life in their own authentic brilliance with all the freedoms, rights, appreciation, love, respect and deserving admiration that I’m afforded as a straight man.

Today, Jason Collins, a black NBA basketball player came out in Sports Illustrated with an article sharing that he’s gay … I find it fascinating that at first I wrote “confessing” instead of “sharing” as if he’d done something wrong and is now coming clean. Truly, what insanity have we been sold!?!?

It’s historic because he’s the first professional athlete in ANY of our major professional sports to publicly share that he’s gay while still playing.

Not long ago he would surely have been denigrated, disparaged, and destroyed by teammates, fans, and much of the non-gay community. Instead, today the most famous and storied player in the NBA, Kobe Bryant, is tweeting, “Proud of @jasoncollins34. Don’t suffocate who u r because of the ignorance of others #courage #support”. In fact, loving and rambunctious support is pouring in from around the league and fans everywhere. Expect more professional athletes to come out soon.

Little saddens me more than to see our wondrous, authentic humanity repressed out of sheer ignorance.

Nothing THRIIIILLS me more than to see our wondrous, authentic humanity given permission to shine in all its cosmic-stardust glory!!

We are literally descendants of the stars, cosmic stardust seeded into earth via comet and left to incubate for millions of years. With billions of us now moving about the planet now, although we are so similar in our fundamental nature the way we each show up is naturally so fascinatingly diverse! Who’s to say we shouldn’t be exactly as we are in this moment?

I was once a Captain in the US Air Force. So it brings me a particular joy to know that since the military chose to allow openly gay members to serve, a new study concluded that “cohesion did not decline after the new policy of open service was put into place. In fact, greater openness and honesty resulting from repeal seem to have promoted increased understanding, respect and acceptance.”

It’s time to fully walk your brilliant, unique truth. Don’t believe anyone who tells you there’s something wrong with you just because you aren’t called to live the way they do. They’re mostly just desperate for others to validate what they do because they’re not so sure about it, either.

I’m thrilled at what’s unfolding before my eyes in our society. These are not just victories for the Gay community. Any moment that our essential humanity is affirmed and celebrated is a victory for us all.

It is indeed the Age of Authenticity.

2) A sweet live video from my old band, Here II Here, performing live their song, “Love Approves“, featuring Ash Ruiz, one of the most brilliantly creative and kind people I know and had the pleasure to work very closely with for 5 years. He happens to be gay.