Why Commitment Never Works (Only Devotion Does) w/ Mikki Willis (002) 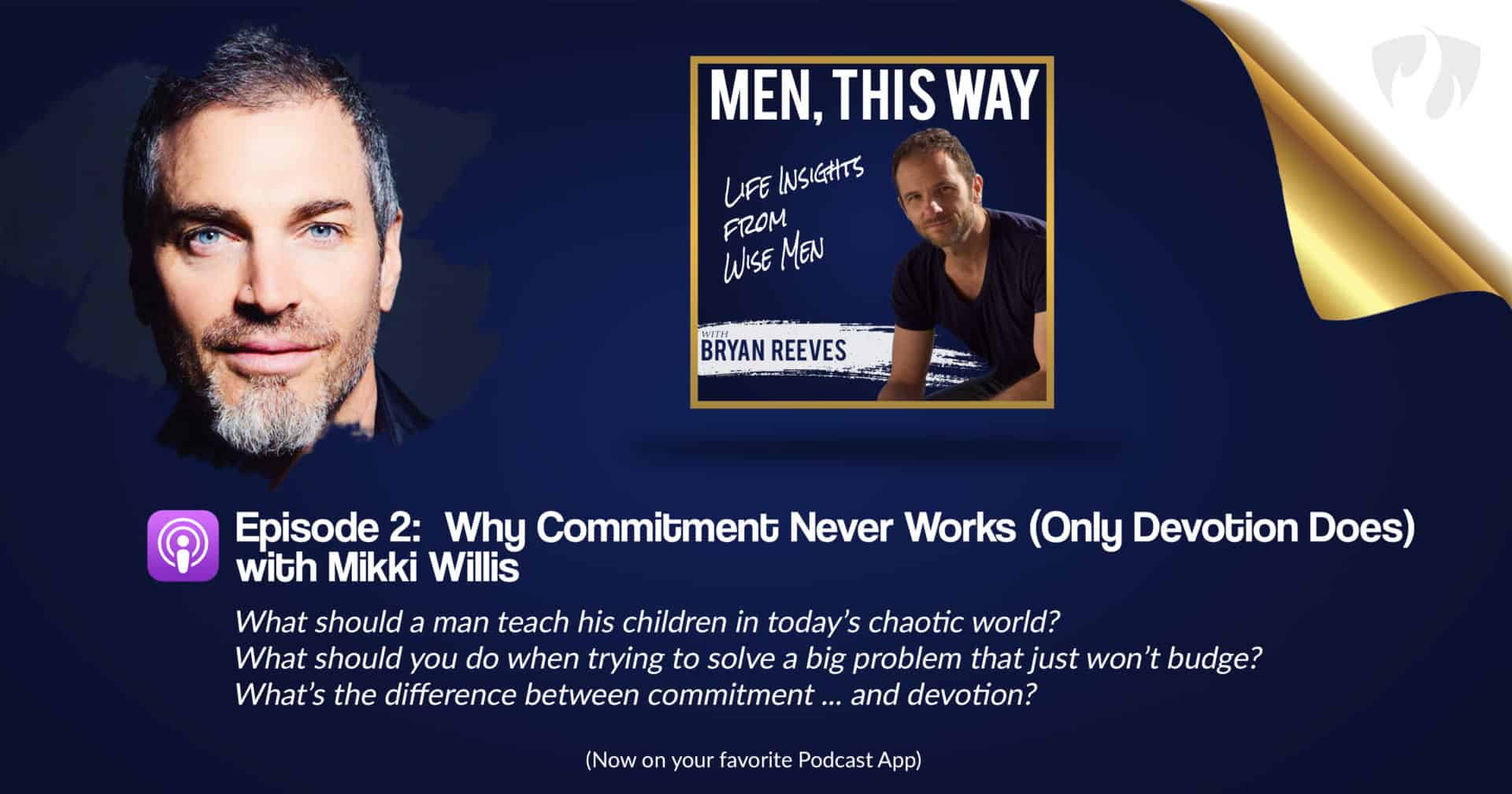 IMPORTANT NOTE: I recorded this episode a few years before Mikki released an infamous conspiracy film and then got caught up in stormin’ our nation’s capitol. I fully disavow the dangerous and absurd ideas his film put forth that have caused harm to so many. I was deeply angered by his participation in the July 6 insurrection of our capitol. However, I’ve decided NOT to take down his interview here, because I do believe our conversation is a valuable one – with no conspiracy-theories or sideways-patriotism included. I do believe at his core he means to be a good man, though I’ll let time be the ultimate judge of that.

What should a man be teaching his children in today’s chaotic, confusing, rapidly changing world?

What do you do when you keep trying and pushing to solve an important problem … yet it just won’t budge?

What’s the difference between commitment and DEVOTION in relationship?

Mikki Willis is an award-winning filmmaker, cinematographer, story-teller, and is regarded as a pioneer in the world of transformative media. The founder of Elevate Films, Mikki and his film crews have produced over 400 productions, including network TV shows, movies, commercials, and music videos for multi-platinum artists from the Black Eyed Peas to Alannis Morissette. Mikki was also in New York, inside the twin towers, on the morning of September 11th, 2001, just hours before they went down, and he stayed for 3 days after to help conduct search and rescue efforts.

I first met Mikki in 2011 when I was managing music band, Here II Here, and we performed one evening at an event at Elevate Mansion in Ojai, CA, where Mikki and his crew were both living and making movie magic. It was an unforgettable evening. A few months later, I went to Mikki’s mansion for Thanksgiving dinner, figuring I’d stay a few hours. I didn’t end up leaving for 4 days. I didn’t know I’d just checked in to Hotel California. Nothing in me wanted to leave Mikki’s enchanted world, and it was the last time I went to dinner anywhere in California without a change of underwear in the car.

Since then, Mikki has taught me, personally – and the world through his short videos he regularly posts on facebook with his two young sons and lovely wife, Nadia – about how to create a beautiful, thriving relationship and family. You’ve probably seen the one where his son, all bright eyed and smiley, proudly holds up the barbie doll he just bought at the toy store. Yeah, that video went viral with something like a bazillion views.

Mikki and his family recently lost their home in a massive California wildfire, an excruciating experience he somehow managed to recreate as an inspiration for millions … which is why I invited Mikki to my podcast. Be sure to stay tuned for Mikki’s 5 Key Takeaways at the end of Men, This Way.

5:00 ~ The best part about being father to two young sons and husband to a beautiful, brilliant ninja-mom woman …

7:20 ~ What a father should be teaching his boys (children) in this confusing, chaotic world …

13:45 ~ A profound life lesson Mikki’s step-father taught him as a kid while Mikki was struggling to fix his bicycle pedal

19:00 ~ The difference between an argument and a fight (with your partner) … and specific language you can use to short-circuit disagreements so you can prevent resentment, stay connected … and MOVE ON!

22:30 ~ What men need to learn to experience/create exquisite relationship

24:30 ~ The profound importance for a Man – even (especially) the “Alpha Male” – to explore his own inner “feminine” essence, to stay connected to his family, his partner, himself.

30:00 ~ Why people get into the wrong relationships.

35:00 ~ Inner liberation through welcoming being judged by others.

36:45 ~ Recognizing signs (in your own behavior) that you are hitting a wall of insecurity, and that it’s time to do some inner growth work.

39:00 ~ In “Mission Impossible” Tom Cruise’s character has to choose between marriage/love/intimacy and saving the world … which should you choose?

40:15 ~ Men require family/spousal support to stay deeply connected to purpose, which is essential to ensure a man doesn’t simply work himself into the grave.

44:00 ~ Commitment vs Devotion … are you Devoted? Or merely committed?

45:30 ~ Where is the place for a man’s preferences when it comes to getting married to a longtime partner where everything is already going great (what if marriage just messes a good thing up?)

46:30 ~ The difference between being committed to a person and devoted to a relationship.

52:15 ~ The biggest challenge facing men in the world today.

53:30 ~ Drug use can be medicinal and healthy, or it can be deadly. Sex can be healthy and beautiful, or it can be addictive and degrading.

54:30 ~ Finding the balance between sensitive and strong.

55:30 ~ How Mikki keeps ”dating” his wife by keeping things clean between them; by not allowing resentment to build things stay fresh.

57:30 ~ You must do this one thing to recreate/maintain intimacy with your longtime partner!

1:02:30 ~ KEY MAN TO LEARN FROM: Jordan Peterson. (Keep an open mind, despite his being controversial, Jordan is helping men learn how to NOT be a victim, and from a place of great respect for Women.)

1:07:30 ~ KEY PRACTICE (7-day challenge to the men listening): Have (actual) deep conversations with other men.