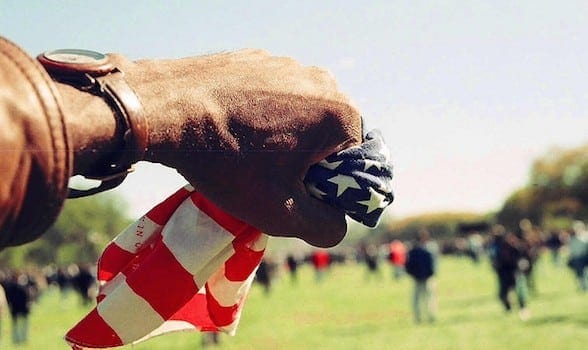 “Those caught up in the structures and dynamics of Patriarchy seek to dominate not only women but men as well. Patriarchy is based on fear – the boy’s fear, the immature masculine’s fear – of women, to be sure, but also fear of men. Boys fear women. They also fear real men.”

I’m a white man. I’ve lived a life of incredible privilege. Even in the middle class.

White people generally aren’t treated that way in this country.

I grew up just outside Washington DC and once got lost on its confusing highway jungle with a white friend of mine. We pulled into a gas station just off the freeway and asked directions of black man pumping his own gas. He calmly told us how to get back to the highway, but then looked a bit more deeply towards us and said we better get moving fast. Because we were white. I’ll never forget the disorientating indignation I suddenly felt overcome my brain. I felt dizzy at his insistence that we move out of there quickly because our skin color meant we didn’t belong there.

If I was a black man in Ferguson, MO, I would be raising hell, too.

We are governed by a predominantly male leadership expressing an overwhelmingly immature masculine psychology that seeks to control and conquer. Our leadership functions less to create a world that honors the whole but more to honor itself first and prioritize private property over human dignity. Our leaders consistently refuse to allow into the leadership conversation the essential feminine gifts of vulnerability (as a strength) and holistic community that genuinely cares for everyone.

The mayor of Ferguson (who happens to be white) stubbornly insists there is no racial divide in his city, while his police force is 90% white, his civilian population is 63% black, and the world watches racially-charged rage convulsing throughout his city. The governor of Missouri (who happens to be white) issues a State of Emergency curfew intended to suppress the furious outcry of a community who refuses to be ignored and abused any longer.

As comedian John Oliver put it, the governor ”took a community tired of being treated as criminals and imprisoned them all in their own houses for a night. And in doing so, employed the tone of a pissed-off vice-principal trying to restore order at an assembly.”

Robert Moore and Douglas Gilette write in their iconic book, King Warrior Magician Lover, that we are ruled by a patriarchal leadership primarily expressing Boy psychology. We are collectively held in the fearful grip of an immature masculine power structure that is “terrified of our advances on the road toward masculine or feminine fullness of being.”

“The patriarchal male does not welcome the full masculine development of his sons or his male subordinates any more then he welcomes the full development of his daughters, or his female employees. This is the story of the superior at the office who can’t stand it that we are as good as we are. How often we are envied, hated, and attacked in direct and passive-aggressive ways even as we seek to unfold who we really are in all our beauty, maturity, creativity, and generativity!”

The violence unfolding in Ferguson, in Israel and Palestine, Ukraine, Iraq, Nigeria and countless other regions around the globe; and also the unproductive state of our bickering US Government, the runaway riches of money-first Wall Street, millionaire athletes, broke school teachers, oceans filling with plastic and so much more – these are all reflections of a world in the grip of an immature masculine patriarchy compelled to act out “dominating, disempowering behavior towards others.” (Moore and Gillette)

What is the solution?

Introspection. Fearless conversation. Taking personal responsibility for the roles we, as men, collectively play in the state of things.

Especially, we must learn to embrace the mature feminine gifts that many women (and surely some men, too) yearn to offer humanity, such as the ability to genuinely honor relationships and truly care for the whole community.

The fact that our community leaders still meet black anger with riot shields and stun grenades is a clear sign that we don’t yet know how to fully care for each other. We must understand that true wisdom means allowing both masculine AND feminine energies to bring their full gifts to the human experience.

Moore and Gillette write that “our dangerous and unstable world urgently needs mature men and mature women if our race is going to go on at all into the future.”

“We need more of the mature masculinity,” the authors insist.

Unfortunately, our culture has no intentional rituals designed to initiate adolescent boys into mature manhood. Such rituals common to traditional indigenous societies are lost to us. Our pseudo-initiations (e.g. getting a drivers license, losing one’s virginity, gang initiations, turning drinking age, graduating high school, etc.) merely cast us off into an “every man for himself” world without really disabusing us of our adolescent masculine psychology. Thus our bodies grow while much of our psychology remains stuck in ways that propagate adolescent behavior.

As thoughtful men who yearn to fulfill our destiny as strong, mature men, we must therefore be vigilant on that quest. We must continue exploring what it means to act in mature ways with our women, children and communities.

We must ask ourselves, are we truly hearing the anguished cries of the world around us?

If we have lost the intentional rituals that would initiate us into a mature manhood, then we must work to initiate ourselves.

We must spend time in thoughtful, real conversation with other men. We must take time to listen deeply to the world around us, especially to our women, who we’ve ignored far too long. We must be proactive in ensuring both our individual and collective evolution as men.

The survival of human civilization may very well depend on it.

Our thriving absolutely depends on it.

p.s. If you’re like me, you strive to live with wisdom and stay in alignment with your deepest truth, in everything you do. So I want to share with you a special one-time FREE virtual event I was invited to share my personal story of darkness and triumph alongside 28 inspiring visionaries.

If you want to live more aligned with your soul’s true purpose, register FREE @ http://www.sheldonpizzinat.com/soulspeak-br