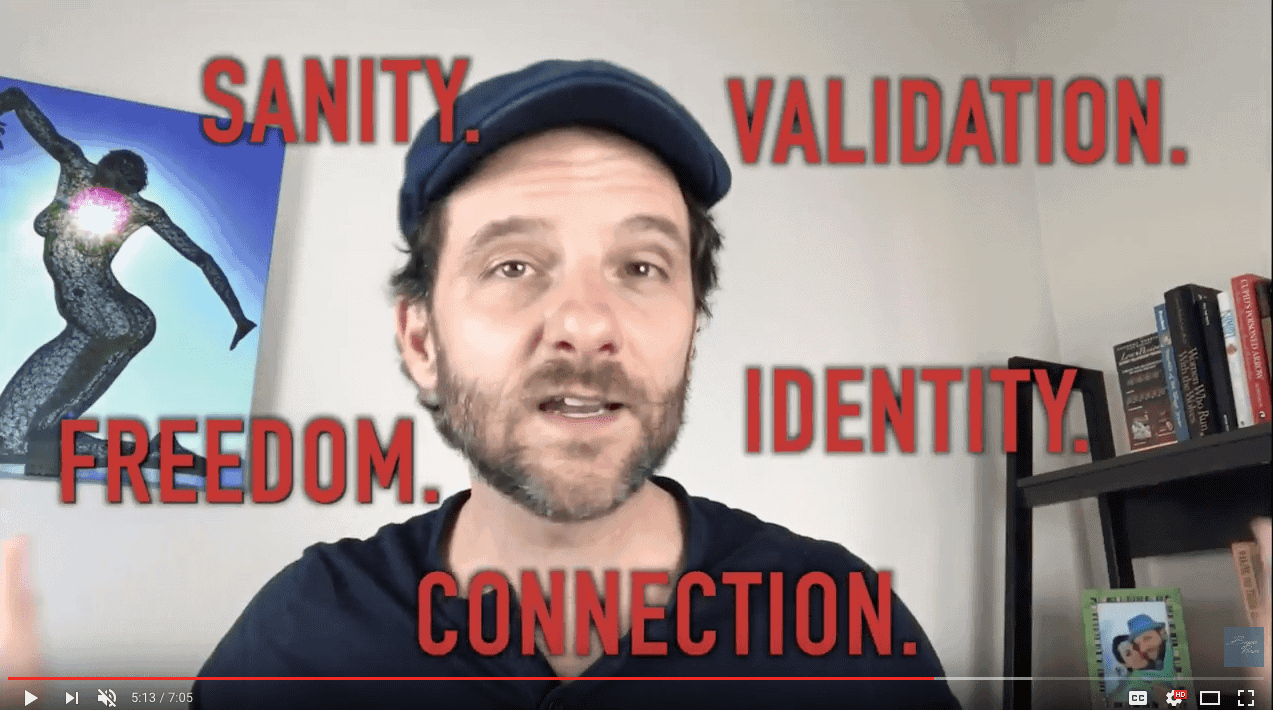 There’s a terrible phenomenon that destroys otherwise good relationships. I call it the “Relationship Death Gap.“

Watch the video or read the script below.

This is what happens:

The more masculine partner in the relationship – the one who prioritizes logic over emotions – is ok with something. Could be anything. Maybe he (or she) wants to go out with friends even though his partner is sick in bed with the flu. Or maybe he wants to invite his ex-girlfriend to his birthday party. Or maybe a million other scenarios.

Whatever it is, his more feminine partner – who’s more feeling-oriented and emotionally connected than he is – feels upset about it.

If her upset isn’t immediately understood and validated, she gets even more upset!

He may not have actually done anything yet, but just the fact that he doesn’t validate her upset and instead defends his logic for being ok with whatever the thing, well … that’s even more upsetting to her.

Even if he agrees to stay home or not invite his ex-girlfriend – JUST to get his partner off his back and NOT because he really wants to or understands her feelings – it hardly matters. She remains upset, anyway.

Now he’s pissed, too. Doubly so. Because not only is he angry at himself for giving in to something that doesn’t make sense to him, he’s frustrated that she’s still not happy after she got what she said she wanted.

This is the Relationship Death Gap! It kills relationships slowly.

Here’s what’s actually going on, and what to do about it:

Naturally, his logic works for him. His reasons make perfect sense to him. He knows his ex-girlfriend is no threat. He knows he loves and is committed to his partner. He even believes a man who can stay friends with an ex is the mark of a generous, loving man. His current woman should be PROUD to be with such a man. And, he sees the countless things he does that prove his love for her! He sees no reason for her to worry or object!

Yet none of his matters to her. Her past experiences – and biology – may cause her to feel insecure about an ex. She may not feel genuinely, fully considered in his logic.

What’s worse, if he can’t validate her feelings because his reasons make more sense to him than her reasons for being upset, now she feels unsafe with him because she can’t trust that he truly cares about her feelings, which she experiences as not caring about her!

He sees what he sees. She feels what she feels. She can’t convince him to change his thinking. He can’t calm her emotions with his logic. The more they both try, the more defiant they both get.

This is how the same argument plays itself out for months even YEARS, as the Relationship Death Gap grows.

It’s maddening to the masculine partner who thinks what happened is long over. He might still think the offense was only imagined, anyway, yet as long as the feminine partner continues to feel that her emotional experience has never been fully embraced by him, the disconnect grows … until no connection remains.

So, how do you close the gap?

It’s simple. Just not easy … because you gotta suspend your viewpoint for a moment and dive into your partner’s experience.

1. The more masculine partner needs to embrace her feelings, even if they don’t make logical sense to him.

In fact, if you can give up needing her feelings to make sense to you – and I mean EVER – just learn to accept that her feelings are real for her, and communicate that you support her feeling whatever she feels, most things will go much better for both of you.

All she wants is to be validated in what she feels, to know you don’t think she’s crazy. And I know her reasons for being upset might make her seem crazy to you, but so long as you orient towards her as though she’s crazy and you fail to embrace her feelings, she’ll feel that too, and she’s gonna be hell for you. She’ll either get louder or shut down altogether, and you don’t want either of those outcomes.

2. The more feminine partner needs to try to understand his logic, even though it may hurt.

Seriously, accept that he’s sharing his reality, and in his reality he never intends to hurt you. If you think he’s lying or he does want to hurt you or he just won’t ever take responsibility for how he affects you, you probably shouldn’t be with him. But if you do trust he genuinely wants to be a good man for you, then assure him you really understand that; that you know he never means to harm you – because that’s almost certainly what he’s aching for you to get. Tell him you can see his good or at least innocent intentions, and he’ll feel seen and understood. His resistance will relax because he no longer feels the need to keep proving himself to you.

I know both of you are worried you’re going to lose something: Your freedom. Validation. Connection. Your identity. Your sanity. But notice how your resistance to embracing each other’s reality is already causing you to lose all that.

You’ve got to understand you two are never going to experience life the same way all the time. Tiny gaps of misunderstanding will continue opening up between you for the rest of your lives together, at least if you’re committed to being real with each other.

The trick is not to get rid of gaps forever, but to learn how to close them quickly before they drain your intimacy of all affection, care and even respect for each other.

What’s surprising is that as you learn to embrace each other’s reality without denying your own, often whatever you were fighting about just stops being a thing because you stop being enemies. Your partner trusts you to have their back.

Which doesn’t necessarily make the ex-girlfriend at the party decision obvious, but if you’re the feminine partner, you just might be surprised how inspired he is to really take care of you once he gets that you genuinely appreciate his point of view.

If you’re the more masculine partner, you’ll be surprised how much she lets go and trusts you, even follows your lead because she feels that you’re going to really care about her feelings whatever may come.

What’s your experience? Please let me know in the comments below!

The Most Essential (and Overlooked) Boundary for Healthy Relationships

Is Your Relationship Experiencing a ‘Crisis of Connection’?

Stop This Tragic Cycle In Your Relationship