"You're Perfect" – holding that sign on a California street corner" 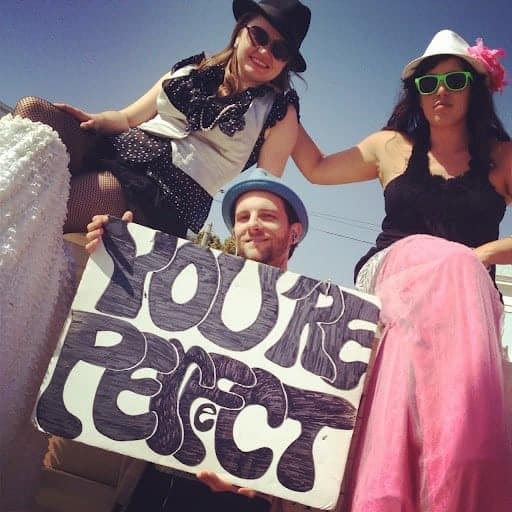 We’re all gathered back in Los Angeles. After a strong 3-month run, January through March, we took a much-needed break before coming back together for a marquee performance at Agape Int’l Spiritual Center … perhaps the pinnacle community of the “spiritual” niche we’ve been charging through the past 2 years.

But that’s not what I want to write about now.

During our break, I started holding a cardboard sign on the streets of LA. My mom doesn’t know about it yet, but I think she’ll actually be proud … if still a little concerned in principle that her son is standing on a street corner holding a sign.

I stand on a street corner and simply hold the sign. I hold it for drivers passing by, and for pedestrians walking past. I hold the sign and I look at the ocean just a block away; I watch pelicans fly by in elegant formation. I smile at people … or not. And I just breathe.

Imagine yourself a 30-something year old man, standing on a street corner in a beach town, holding a sign that says “You’re Perfect.”

The first time I held the sign with my dear friends Ash and Zee at my side, taking their turns. That was simply a blast. I had my backup with me. We were all together, like a team of happy, oddly well-dressed, good looking hippies. People waved and honked and laughed and smiled. It was amazing to watch the world open up … like watching a flower bloom under the morning sun.

And then I went solo. Holding the sign. Now just another crazy homeless man on the street corner holding a big sign.

Except that I have a home. I have a job. I have quite a busy schedule, actually. I even have an iPhone. What crazy street-corner sign-bearer has an iPhone? … One who’s obviously in a crazy cult … And I ain’t in no damn cult!!! LOL … Well, just the cult of loving what is!

I tell you it’s the most extraordinary experience.

I’m careful as I can be not to preach. Here I am holding a sign that says “You’re Perfect” … last thing such a bold statement gives me license to do is to preach.

And I guess that’s really the point.

I’m in love with the world. At least I want to be. I want to love people and enjoy them as they show up to me. Not as I wish they would show up, but as they actually do. Seems to me that’s the only way to joy and freedom. I’ve yet to meet a person who could be exactly who I wanted them to be for long. So better to simply love them for who they actually are.

So I hold the sign. And I quickly discovered It’s one of the most powerful spiritual practices I’ve ever engaged in.

It brings everything up.

Insecurity … What do people think about me??? Especially the ones who ignore me. Pretend they don’t see me standing there with a black & white sign the size of a small billboard right next to their heads. They surely think I’m homeless. Think I’m crazy. Delusional. Lazy. Or that I want something from them. … and blessedly I get lots of time to process the “So What?” …. Ohhhhh, what a delicious mindfuck!! I can feel it detoxing the fear out of my cells!

Joy … The smiles and the thank you’s and the picture taking and the occasional person yelling out to me “You Too!” Watching white people, black people, hispanic people, all change their facial expressions to one of pleasant surprise and genuine gratitude.

Laughter … the fascinating responses … “Is this a Christian thing?” … “Who sent you here?” … “Who’s paying for your time?” … “What does it mean?” … and there was one really puzzling response … very simply, “no, thank you.”

Judgment … most often reserved for those who ignore me: they obviously don’t get it. they’re actually not perfect because they don’t understand. those people are ignorant. that woman’s probably cheating on her husband and can’t take in this message … oh it goes on and on; the insane chatter in my brain!!! Making up stories constantly!

Once, when I was a Captain in the US Air Force, I decided to perform with my guitar on the streets of Key West, FL, during a vacation. I had let my facial hair grow a bit, wore some bummy clothes … and then performed in wonder as most people ignored me and some teenage girls even laughed at me with contempt … though maybe because i had a blow-up goat next to me (other performers had dogs; I could only find a blow-up goat on short notice); the only ones who gave me any money were some young kids who dropped a few coins in my guitar case. I gave it up, mortified, after about 30 minutes.

That experience never left me. It fascinated me. Because it horrified me. Becoming what seemed like less than nobody to most of the people around me. Maybe I just wasn’t good. Maybe it was the blow-up goat. Who knows? I just know I felt completely ignored and unvalidated, and it horrified me!

Now here I am once again, in a position of great honor and good fortune, managing Here II Here … and standing on a street corner, holding a sign with a strange, unfamiliar message on it.

I’m not passing out flyers or business cards. I’ve no identity other than that I have a sign that says “You’re Perfect”.

It’s so simple, and many people seem to get it. At least in Manhattan Beach CA where I’ve been doing it lately. I’ve gotten some disagreement from a few rare people, though it’s been mostly polite. However, I’ve been warned there may be a “Fuck You” or two headed my way.

This isn’t my original idea. The brother, Ben Smythe, who gave me the idea – he’s been doing it for years up in San Francisco – said simply, “When you can love “Fuck You!” as much as you can love “Thank You!”, then you’re kissing the Buddha.”

Even beyond the obvious rewards of seeing people smile, open up and say hello, that’s one aspect that really excites me about doing this. To live in a world I love so much that I can genuinely smile and see as perfection itself, even as it tells me to fuck off … there’s just something about loving this planet that profoundly, at such intimately honest depths, that it seems to me worth standing on a street corner for … even if everyone thinks I’m homeless and crazy!!”

I’ve taken a 21-day challenge to do this at least 1 hour a day as much as possible the next 21 days. We’ve got a busy schedule, but I’ll do my best. In any case, it’s all perfect!!!

p.s.p.s. Just two days ago, a man living on the streets came up to me, fascinated and going through a tough moment in life. He started asking me why I was holding the sign. After a few minutes, I suggested he simply try it for himself. So I gave it to him and he started holding it up for all to see. “You’re Perfect” … here was this man, unshaven, downtrodden attitude, not sure which way to go … and within 5 minutes people were saying hello to him and smiling – including pretty girls! He told me with nervous jubilation after just a few minutes, “Wow, man, I feel a burden lifting already!! Something good is coming my way … I feel it!” It was amazing. I encouraged him to just soak it up.

And that’s the magic of the sign. It powerfully rearranges the energetic space in the body; in the world. I feel it every time I hold up the sign.

Who knows, maybe he’ll make his own sign and there will be two Manhattan Beach street corners sign-ing “You’re Perfect” to the World. That’s what I call community service!

This pic below shows the guy holding up the sign .. smiling.