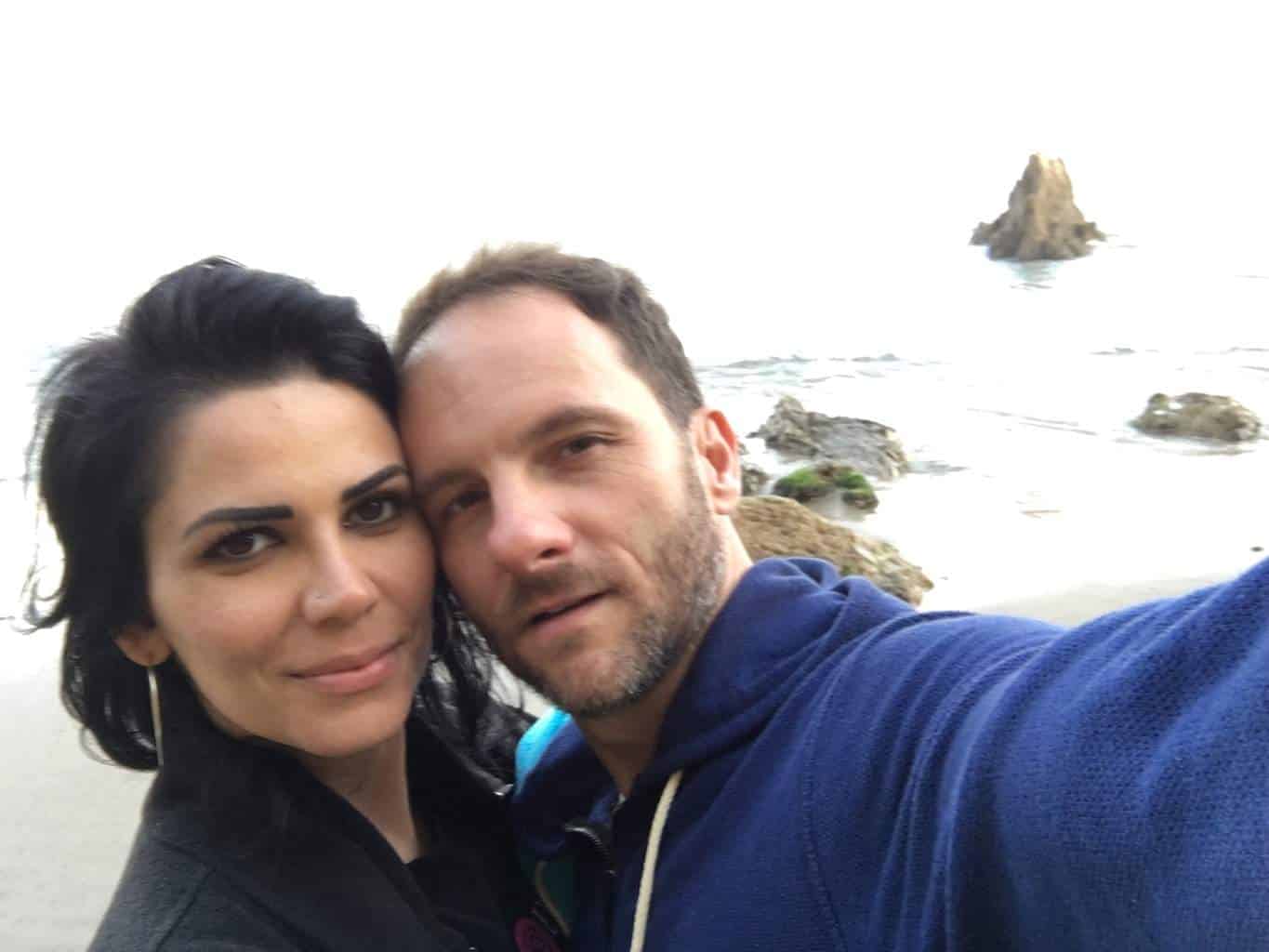 This is the inspiring true story of how I met Silvy, the woman I’ve waited a lifetime for – in the middle of nowhere – because I trusted my heart over my fear.

Indeed, it was pure magic.

For when we met, I was all alone in a remote mountain valley cabin in the middle of Idaho.

While I was there, I intentionally called her in. And she came quickly, within days.

I later learned she had been calling me in, too.

Read on … this story could profoundly change your life.

In Summer 2015, I was feeling deeply called to leave Los Angeles where I had been living for a few years, for a personal retreat alone to finish writing my second book, Tell The Truth, Let The Peace Fall Where It May.

Actually, I was aching to leave Los Angeles.

I could feel that intense ache through to my bones. Life was calling me out of hectic city and into quiet nature to finish my book and clear my city-frazzled head.

When two angels in Idaho offered me a cabin (with jacuzzi) nestled among the roots of a forest on the edge of a remote mountain valley, my heart knew it was time.

I was absolutely giddy to go.

But about 4 days before I planned to leave LA, I got a phone call from a casting agent. I’m not an actor, but living in LA and knowing folks can yield all kinds of curious opportunities, and this one leapt into my lap. American Express was doing a commercial and wanted to film an actual man (not a fictional character) who was going on an “eat-pray-love” kinda journey. The casting agent knew about my trip and wanted to submit me to the director. I was quickly chosen as one of 2 finalists for the commercial, which would pay $2,500 and expose me (and my work as a coach/author) to possibly millions of people.

There was one catch: I had to stay in LA at least another 2 weeks.

“You can’t miss this opportunity! You spend everything you make on rent, your business and working with your coach; you could really use $2500! Not only would it pay for this trip, but you would get exposure to countless potential clients! You can totally stay in LA a few more weeks, no problem!”

“It’s time to leave LA. Now. You feel it deeply. And although I can’t yet show you how, I promise you will make more money if you go to Idaho now. Trust. Let go. Go.”

I noticed that I felt light and excited all over my body when I thought of leaving for Idaho. I also noticed I felt only heaviness when I considered staying in LA for the commercial.

(note: paying attention to how your body feels when faced with a decision is an essential power practice!)

So I let go of the commercial and drove off into the unknown.

About 10 days later, after journeying through Nevada, Utah and Idaho visiting old friends and making new ones, I settled into that mountain cabin with plump black raspberries bursting off the bush outside my kitchen window, which overlooked a glorious green meadow where the sun would set late each night.

I quickly settled in, and started writing the 10th – and final! – draft of my book. 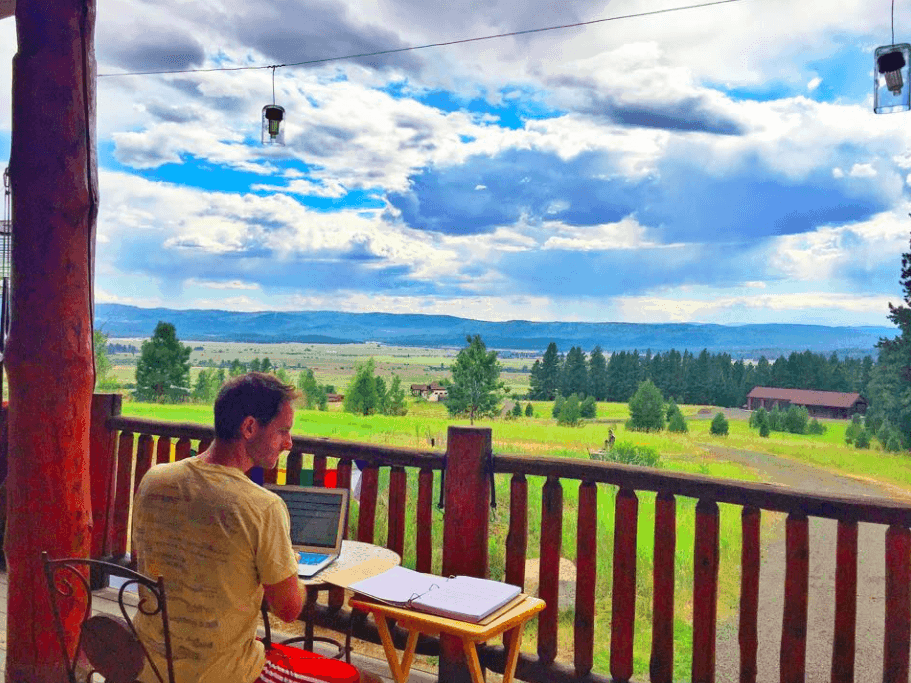 The road trip had been clearing my frazzled city-brain with each passing mile. Now, here I was with weeks of nothing stretching out before me, relaxed and ready to finish writing.

I had been there a week when, with a relaxed mind and a trickle of internet service, I decided to check for the first time in many months how many people were reading my blogs. I hadn’t been checking those stats because, well, I was just sooooo damn over worrying about the numbers. I just couldn’t any longer care about such things back in LA. Not that I cared in this cabin, either.

But when I awoke that first quiet Sunday morning, my mind more rested and calm than it had been in a long time, I noticed a subtle whisper drifting through the cabin stillness like a butterfly.

As I rose out of bed, I looked at my blog stats and saw that 1000 people had already read “Choose Her Every Day (Or Leave Her)” that morning, a blog I had written months earlier. I also saw that only 500-1000 people had been visiting my website on an average day, so I casually decided to just repost that blog again on my new Facebook author page thinking it might touch a few more people that day. Then I forgot about it, had breakfast and went for a mountain bike ride.

Thinking that was the height of it and by morning it’d be over, I was even more dumbstruck the next morning to see that over 120,000 people had read that blog before I’d even opened my eyes.

In the next 3 days, over 3 million people would read that blog.

I didn’t know it, but my life was about to change in the ways I had only so far dreamed of.

One night during that explosive week, I celebrated with a nighttime soak in the hot tub under a black sky sprinkled with stars like glitter. I drank a glass of celebratory champagne as candles lit a flickering ring around the patio deck, and I reflected:

“I have lived a blessed, magical life. I’ve adventured all over the world, trekked across deserts and oceans. I’ve lived in strange, foreign lands and slept in palaces and mansions and trailers and barns and everything in between. I’ve encountered myriad wondrous human characters and loved most of ‘em. I’ve made money and lost it. I’ve loved many women and left or lost every one. Here I am once again, enjoying another magical moment … but all alone.”

I decided in that moment I was done journeying in this life alone.

I spoke aloud an intentional prayer – “I am ready to start building a world with an extraordinary woman” – words that floated out through the steamy hot-tub haze towards an infinite black dome sky.

Over the next few days, my blog continued to explode and thousands of messages poured in. My courageous assistant, Gina, handled most of it (I had hired Gina on faith a year before by giving her $500 for a month’s work when I only had $1500 to my name – another act of intuitive knowing despite my worried brain telling me I’m crazy).

Facebook friend-requests and new fans poured in by the thousands, too.

The day after my hot-tub revelation, I received a friend request from a dark-haired, dark-eyed woman named Silvy. She lived in LA, and we shared special friends, so I started a chat with her.

Expecting nothing, simply connecting, we chatted for a few minutes. Feeling inspired, my heart-ripped open by this magical moment, I vulnerably confessed my deep clarity that I was ready to share this wondrous life I’m so grateful for.

I had ZERO IDEA I was actually typing this to my incoming life partner.

She would tell me months later my vulnerability was endearing. She was more accustomed to men who tried to impress her with money and success, who weren’t willing to offer the simple truths of their hearts.

The chat lasted a few minutes, then it was over.

Over the next few months, I traveled to the Australian Outback and was consumed by all that viral-blog energy coming at me from everywhere. Silvy and I had a few missed encounters and didn’t really connect again.

Then, two months after our first chat, stars again aligned and we were finally able to meet at a cafe near her sister’s home.

In the very moment we locked eyes across that cafe, I felt as though I was about to dive into the deepest ocean I’d ever known.

When we hugged hello seconds later, I dove in … or perhaps I fell in. And I haven’t stopped exploring her delicious depths since. This woman contains the whole universe inside her. There is no end to the mysteries that animate her and fascinate me.

What most delights me about being with her is that – though I began loving her soon after we met – I find that I like her more and more, the more I discover of her.

As Silvy continues to sweep like springtime across the land of my deepest heart’s dreams, I’m profoundly aware that I had to trust my heart’s inner knowing and journey alone to the middle of nowhere to find the quiet place (within me) where I could finally discover her.

I told you … Pure Magic.

To think I almost traded a massive breakthrough in my writing career, more money than I’ve ever made and meeting the woman I’ve waited a lifetime for … all for a $2500 credit card commercial and prolonged discontent.

So next time you’re faced with choosing between trusting in fear or trusting in what would delight your authentic heart, remember my story. Fear might get you $2500 … but it will cost you your biggest dreams.

P.S. If you’re ready to call in your beloved – or learn how to inspire authentic love in your current partner – Download my “Love, Sex, Relationship Magic” online course.